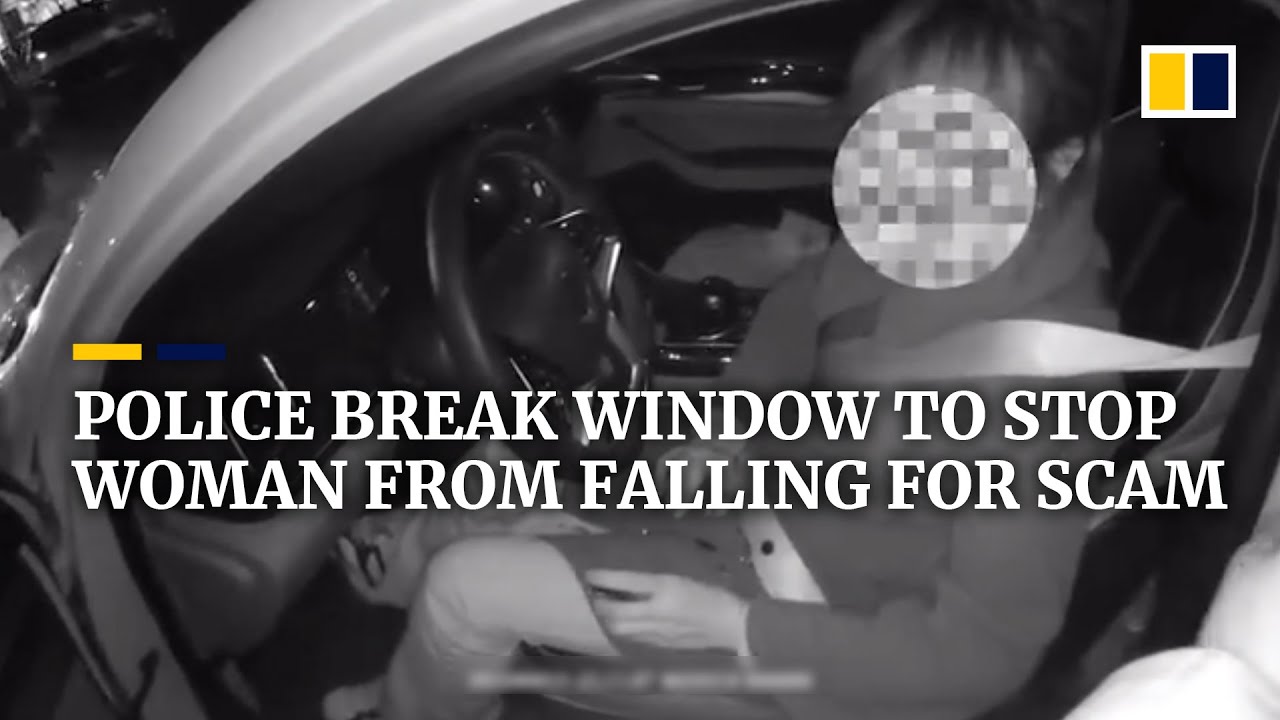 Scammer got caught - In central China's Hubei province, a police officer busted a car window to prevent a woman from falling for a phone scam. The woman had locked herself in her car and was preparing to send a scammer 50,000 yuan (US $7,700).

In the video, the concerned police officer warned the woman inside the car to not transfer the money to a scammer over the phone.

According to the report, her husband attempts to convince her, but she is defiant and does not listen. The cops attempted everything they could to persuade the woman, but it appears that their efforts were in vain. Then, all of a sudden, they smash the car's window to prevent the woman from falling into the scammers' trap.

Conversation Between Cops, Woman, And The Online Scammer

The following is a conversation that took place during the incident:

The police asked the woman inside: "Why didn't you open the door?"

Scammer on the phone call: "These bad people are coming from you."

Scammer to the police: "You will be arrested."

Police to the scammer: "Which police station are you from?"

Police to the scammer: "You will be arrested."

Police to the woman: "Did you transfer him the money?" (and the woman says no)

Police officer: "This is absolutely a scammer. Why did you believe in him? Come out quickly. Don't be afraid. We're police. Look at our uniform and car. You can trust us."

In a telephone scam, people try to get your money or personal information by phone. Real people might call, or they might send text messages. Scams can come in many different ways. There are a lot of false promises made by callers. They say that you can buy products or invest your money, or get free product trials. They may also give you money in the form of grants and lotteries, which are both free. They may call and say that if you don't pay them, you'll go to jail or get sued.

What Happens If You Answer A Call From A Scammer?

What Happens If You Call A Scammer?

If you call them, the spammer will be able to determine whether or not the phone number is in fact owned by a real person. Additionally, the spammer can simply impersonate you by posing as someone from your similar area code and setting up a brilliant social engineering trick that may entail you thinking with the wrong side of your brain.

Is Scamming A Crime?

California's Online Fraud, Hacking, and Phishing - Computer crimes that entail gaining unauthorized access to, altering, or destroying a computer, computer system, or computer network can result in a fine, imprisonment, or both. The maximum fine imposed might be anything between $1,000 and $10,000.

Scammer Got Caught - Can I Press Charges On A Scammer?

If you consider you have been a victim of an internet scam, the first thing you should do is request a refund from the perpetrators. If none of these options are successful, you can submit a complaint with the Federal Trade Commission (FTC) or your local consumer protection office.

How Do I Get My Money Back From A Scammer?

Make sure you call your bank right away to let them know what happened and ask if you can get your money back. Most banks should pay you back if you've sent money to someone because of a scam.

Reddit Users Discuss Methods To Respond To A Telephone Scammer

CheeseNBacon2 said: "Waste their time, ask tons of questions, make it seem like you're interested but just not sure, keep them on the line for as long as possible, then just bail."

Lewisnwkc mentioned: "Usually a telemarketer in my experience doesn't have amazing English, although they do really well, I find that they cannot keep up with so much nonsense to think that it is nonsense. Speaking as fast as you can, I make no sense up like I say "the corn oil is looking at Wednesday before the bees will consider it as payment. Without love who knows if chicken spice will smell like enthusiasm."

Redavid: "Answering the call is always a mistake."

Zik9matutero: "I try to not answer numbers I don't know unless I'm expecting a call, but I would say for sure keeping them on the phone as long as possible. Giving fake credit card info very slow until he's about to go crazy and then lure him in with I just found the right card."

I_am_seed: "Pretend that you don't understand the language they are speaking."

How Long Would You Deceive A Fraudster On The Phone - Reddit

Ask him stupid, irrelevant questions like, what time is it where you are, what are you wearing, how're the kids, how's the wife, etc. Do this for a few minutes, then put him on hold because "I need to put the baby to bed" or something like that. Then proceed to watch a movie or something else to waste his time. If he hasn't hung up by the time you're done, apologize for the wait, but hang up midsentence, saying Oops, as if you dropped the phone.-Gigglesthefirst

Warning Signs That You Should Know

Scammers successfully obtain your information on your device if you:

During the COVID-19 pandemic, many scammers got caught in many ways. The authority warns us that they may try to get money from you. They might call, send an email, send a letter in the mail, text, or use social media to get in touch with each other. You should be extremely cautious about the amount of personal information you disclose on social media platforms. Scammers might use your personal information and photographs to construct a fake identity or to target you with a fraudulent scheme or scam.