Tarot Cards Meanings Holds Different Importance To Whom Interprets Them 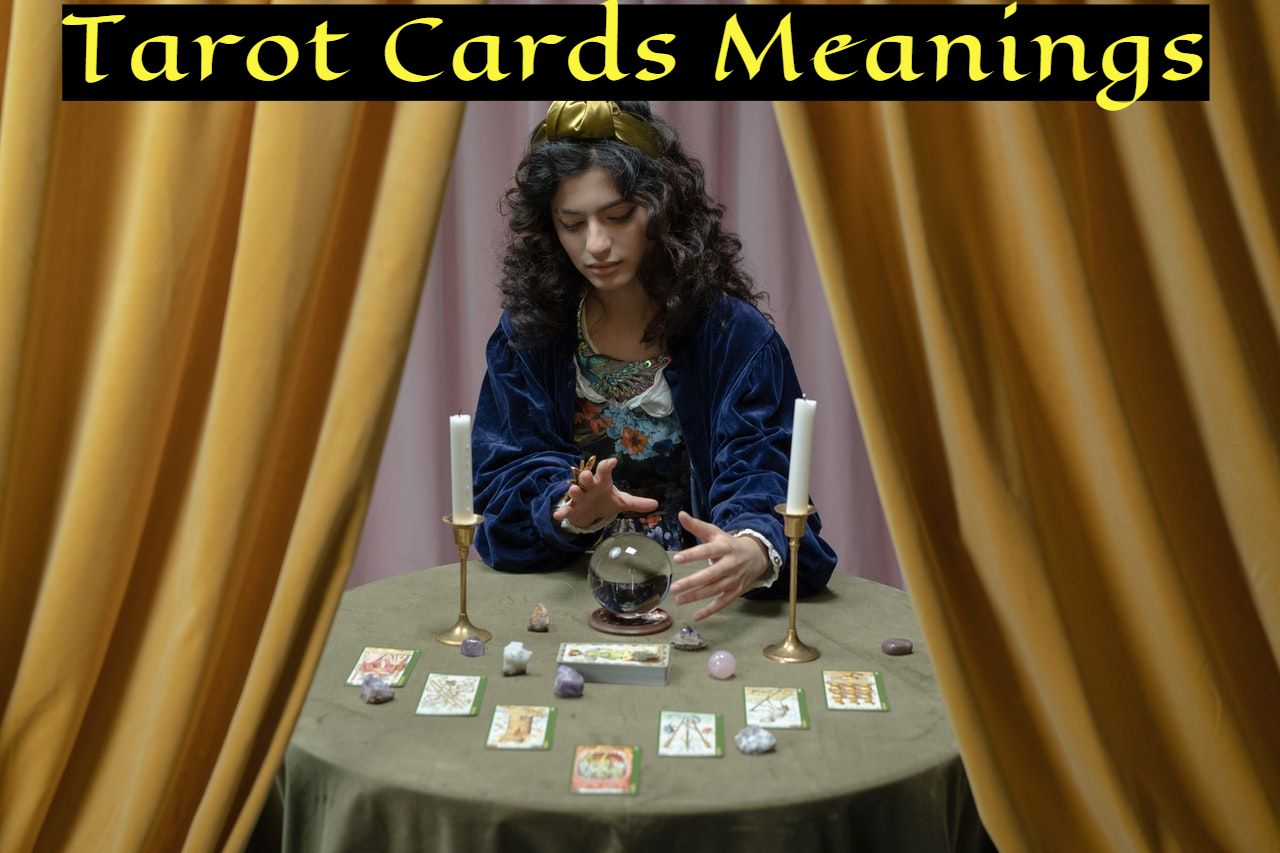 The tarot is a potent instrument to boost your intuition, regardless of whether you're an experienced witch or a complete newcomer to mysticism.

Tarot cards meanings is used to get answers to your most important life concerns, such as when you're facing a job decision or having issues with a buddy.

Each card is imbued with a special energy that can convey specific messages or provide a fresh viewpoint on your circumstances.

Although you don't need to be an expert to utilize tarot, it is crucial to understand the meanings of all 78 cards to get the most out of your reading.

According to Erin River Sunday, a tarot reader and astrologer with Birthdate Co., "most readers interpret tarot cards using a mix of knowledge and intuition along with the card's picture.

" However, many of the tarot interpretations employed today stem from the pictures in the Rider-Waite deck, often known as the Rider-Waite-Smith deck, which was released in 1909. Tarot divination began in Roman cultural traditions during the Renaissance.

Your intuition is quite important while trying to interpret the different meanings of each card, in addition to understanding the fundamental drift of each card.

As you shuffle your cards, pay attention to your feelings and thoughts, and consider the associations you have with the images on each card you pick.

The layout, or the way they are drawn, might be as complex as a 10-card Celtic layout or as straightforward as a three-card or even a single pull.

Sunday proposes drawing one card daily to learn the tarot by asking yourself questions like, "What should I focus on today?" and "What is the vibe like today?"

Understanding the message each card is attempting to convey to you will be simple once you acquire the feel of its symbolism.

What Do You Need To Read In A Tarot Card?

You will need a tarot deck first. The Rider-Waite deck, created by artist Pamela Colman Smith and released in 1910, is the most well-known and widely used.

Since the meanings of the cards are sometimes obvious, the Rider-Waite deck is frequently recommended for novices.

When they are not, there are many interpretation aids available in books and online. Many decks, notably the Rider-Waite, include a little piece of paper outlining each of the most typical interpretations of each card.

The Rider-Waite is not the only deck available to beginning readers, despite being the most well-known.

While the Wild Unknown deck is very attractive, novice players may find it a little less obvious.

Like the Rider-Waite on steroids, the Morgan Greer deck has comparable symbols but with larger, bolder faces and more vibrant, variegated hues.

There are contemporary, varied decks as well as decks with Game of Thrones themes.

The most crucial step is choosing a deck with pictures and meanings that appeal to you. Since you will be utilizing them, they must match your personality and sense of style. 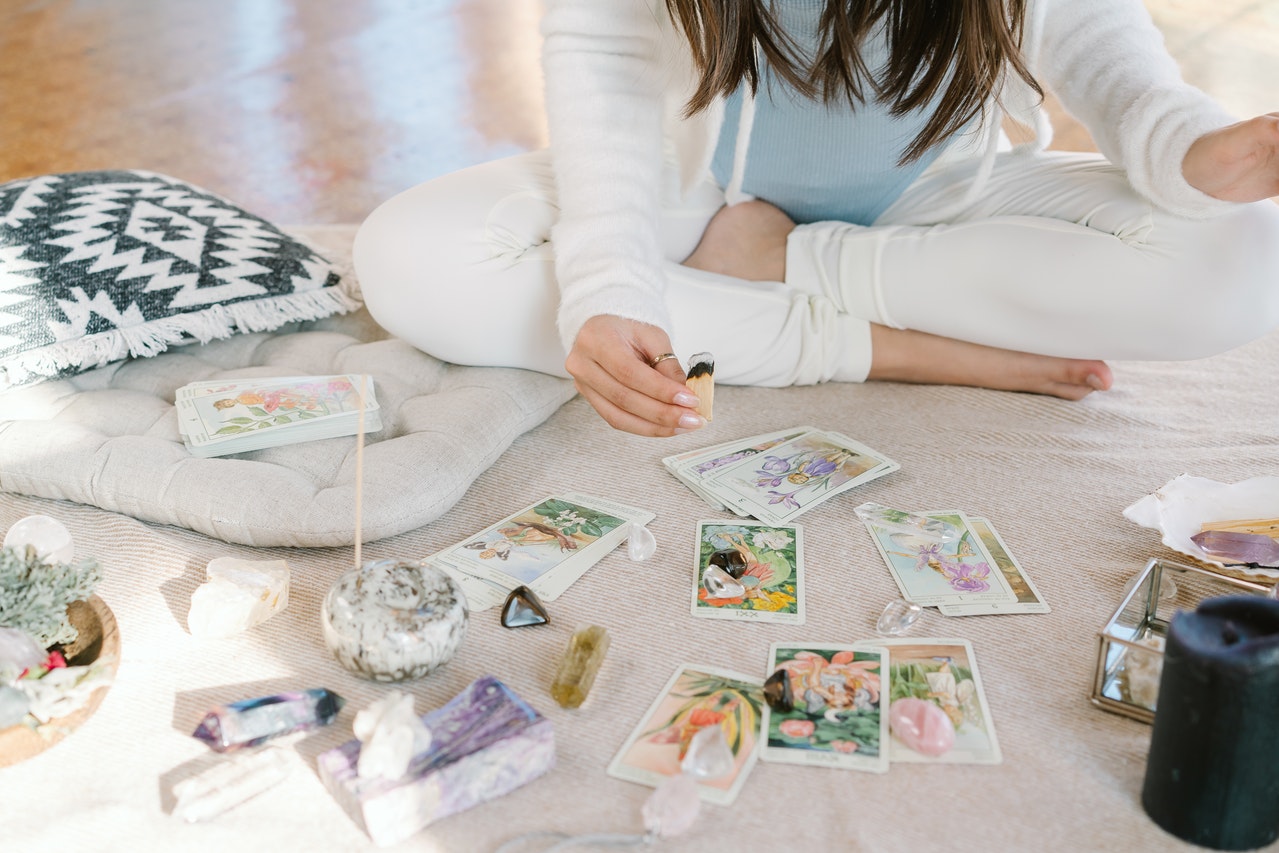 How Do You Read Tarot Cards?

When reading Tarot cards, there are four fundamental stages to follow: Consider your question first, then choose a Tarot spread with placements that speak to it.

The cards will then be laid out and shuffled before you interpret them to get the answer to your query.

Tarot card interpretation may be learned by anybody. You can find a lot of spreads online to get ideas, and you don't need to know the meanings of every card; just click on the cards above to find out!

Although the conventional interpretation of the Tarot cards is part of it, you will also need to use your feelings and intuition to understand how the cards relate to your particular circumstance.

The major and minor arcane are the two halves of a tarot deck. The Fool's Journey through the Tarot is portrayed by the 22 main arcane cards.

They stand for universal themes and life lessons, such as coming to a fork in the road or having faith in one's talents.

For instance, if you draw the Lovers from the major arcane, you can consider themes of togetherness and balance, but it can also signify having a choice.

When a card from the major arcane appears in your reading, it always conveys a crucial message.

The 56 cards that make up the minor arcane set are used to symbolize lesser, more commonplace topics in life.

There are four suits, each with 14 cards, and they are organized identically to a standard deck of cards.

Each suit starts with an ace, then moves on to cards 2 through 10, then four face cards or court cards: Page, Knight, Queen, and King.

You may better comprehend a card's mood by knowing how each of the minor arcane's four suits wands, cups, swords, and pentacles relates to one of the four astrological elements.

Wands are connected to the fire element, so you can think of these cards as being action-oriented.

Which asks you to focus on reason and thought; and pentacles are linked to the earth element, so they are concerned with the physical world.

Each tarot card contains predetermined associations, but the interpretation depends on the themes that the reader is experiencing.

In her book Tarot for Change, tarot reader Jessica More says, "When you're pulling cards, you'll have notions about what the cards imply, interpretations you adore, and associations you'll be anxious to highlight."

But let's first take note. What sensations are you having physically? What recollections come to mind?

As a starting point for understanding what the tarot cards you pull are attempting to tell you, consult a professional tarot reader and expert interpretations of the meanings of the tarot cards listed below. 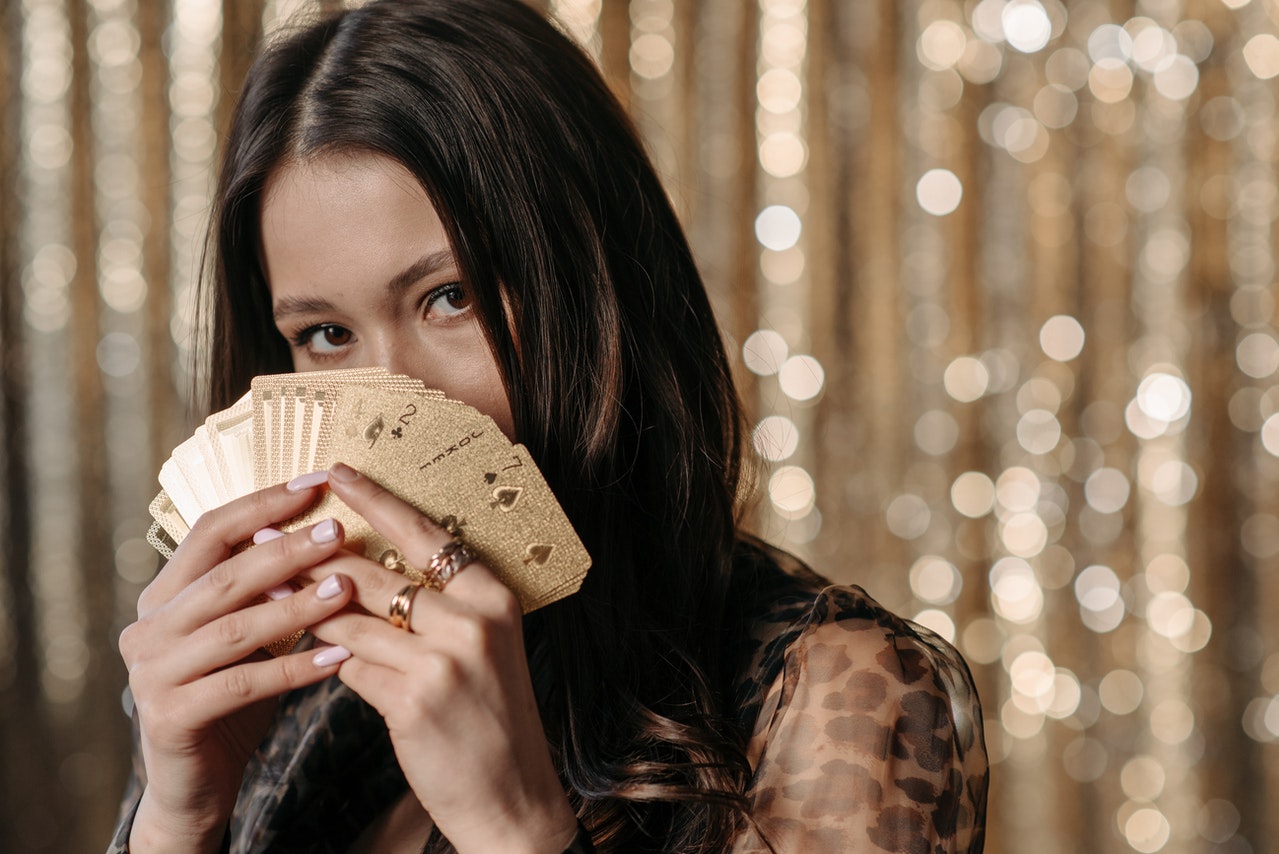 The Major Arcane In Tarot Cards

A traditional deck of cards consists mostly of the Major Arcane and Minor Arcane. Major Ariana cards are also known as Trump cards.

Major Arcane portray the Fool's Journey as he picks up lessons along the way, starting with "The Fool" at zero and concluding with "The World" at number 21.

According to astrologer and tarot reader Bess Matassa, when drawn during a reading, they stand for a broader topic and encourage us to consider the greater picture. Here is a quick summary of each:

The Fool, card number 0, is the first card in the Major Arcane and stands for the start of a journey, innocent amazement, danger, and promise.

It represents spirituality, healing, manifestation, and a relationship with the divine.

Is a conduit for the High Priestess on Earth and symbolizes nature, the Great Mother, fertility, and all of these things.

It represents the potential for mastery, influence, stability, and leadership.

Stands for success, accomplishment, triumph over adversity, and empowerment.

This represents the struggle between the ego and intuition, as well as the necessity for self-control and self-interest that is refined to achieve inner peace.

This represents the value of spending time alone as well as introspection, contemplation, and inner reflection. 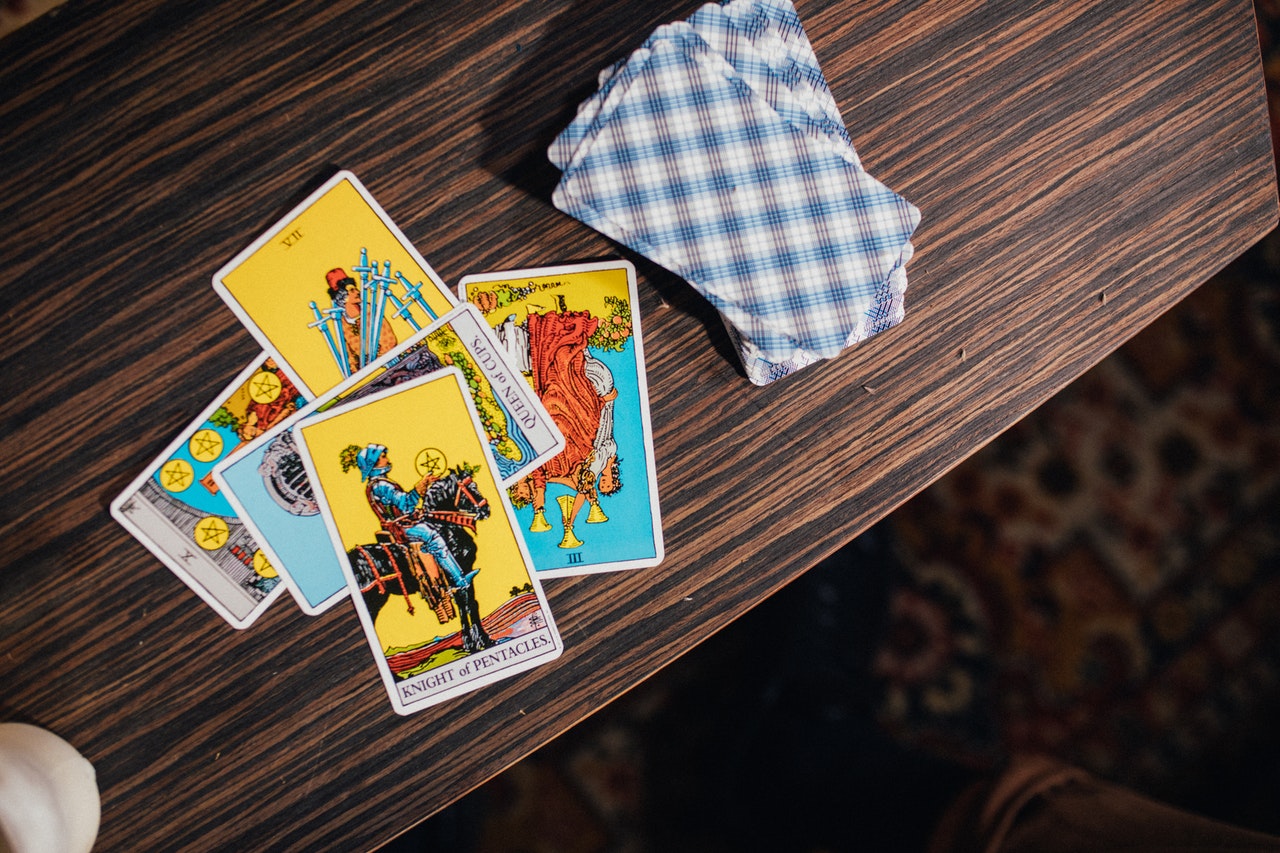 Tarot Cards On The Wooden Surface

Represents upcoming change, which is frequently for the better, as well as the natural seasons and cycles of life.

Represents a circumstance that must be endured, consequences, resignation, and stagnation.

Is a symbol of the end, harvesting, liberation, and progress. (Not to be taken as a prediction of death.

Represents imprisonment, the shadow self, and sensual pleasures of the world and the material kind.

Represents danger that is already here or that is about to happen.

Stands for inspiration, transcendence, a connection to the divine, and spirituality.

The Sun is a symbol of vigor, happiness, luck, assurance, and genuineness. It and the world are the only two words with no opposite or negative connotations.

Represents decision-making, the resurrection, awakening, and independence from internal turmoil.

Represents a turning point, a significant transformation, and self-actualization. It doesn't signify something opposite or bad. 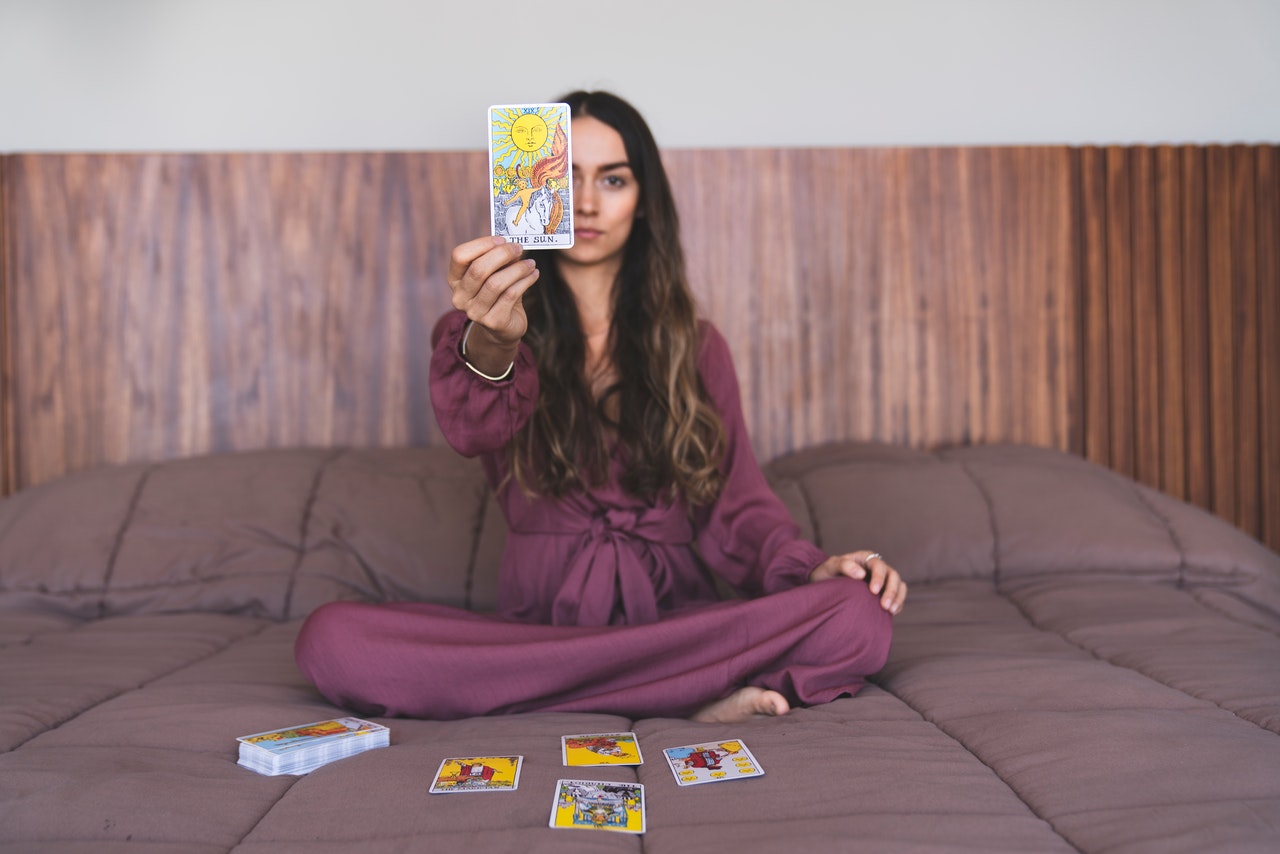 Fortune Teller Is Holdin Tarot Card In The Hand

The Minor Arcane In Tarot Cards

The 56 cards of the Minor Arcane are divided into four suits of wands, cups, swords, and pentacles.

The court cards (King, Queen, Knight, and Page) are included in these four and can be read as persons or personalities or, as Matassa puts it, "pieces of ourselves that we're being urged to recover."

The Minor Arcane focuses more on your everyday situations, while the Major Arcane symbolizes larger issues.

That does not mean they are any less important. The Minor Arcane is like the weather if the Major Arcane represents the season. What each suit refers to is as follows:

The element of fire, which deals with our fervor and energy, is associated with the suit of wands.

According to Matassa, wand cards have to do with creativity, meaning, and how we use our energy. They also have to do with "infusing deeper significance into a banal situation."

The water element, which is linked to emotions, feelings, and intuition, is represented by the suit of cups.

According to Matassa, "For me, it's about those inside waterways, the internal, emotional experience."

The element of air and the mental world, including intelligence, thoughts, and how those thoughts emerge, are associated with the suit of swords.

When considering the cards in this suit, Matassa frequently thinks about how they reflect how we "become involved with mental patterns and tales we tell ourselves."

Pentacles deal with the tangible world since they are related to earth. Although they are frequently connected to money, they may also represent our values, worth, and sense of security.

Golden Tarot Cards On The Table

How Can You Learn More About Tarot Cards?

There are several books you can buy and classes (online and off) you can take to hone your interpretation abilities if you want to go forward in the tarot world.

Who has a very relaxing accent, and spiritual advisor Mystic Rain is also widely available on YouTube.

What Is The Most Important Card In Tarot?

Since the 1930s, the corner index for the Fool in Tarot Nouveau decks has frequently been a black-inverted mullet. The Fool is one of the most expensive cards in practically all tarot games.

How Do You Know What Tarot Card Represents You?

Your birthdate is another great way to identify your tarot card. This is an easy way to tie the primary arcane to your birth date.

What Religion Do Tarot Cards Come From?

Tarot cards are frequently cited as a component of New Age philosophy and practice along with astrology, aspects of Buddhism, and paganism.

There is just as much information to be learned from the whole image as there is from its parts, especially in bigger spreads.

If you're reading for someone else, take advantage of the chance to collaborate with them; the more pressure you put on yourself to mind-read, the harder it will be to do so.

This should come as a relief: it's OK to ask the topic questions about the cards and to discuss possible applications of the cards to their initial query.

Tarot reading doesn't make you clairvoyant. When a questioner asks about money, but you only get two cup cards and "the lovers,"

the cards will occasionally not match at all. This might imply that their love life was what they truly wanted to talk to you about.