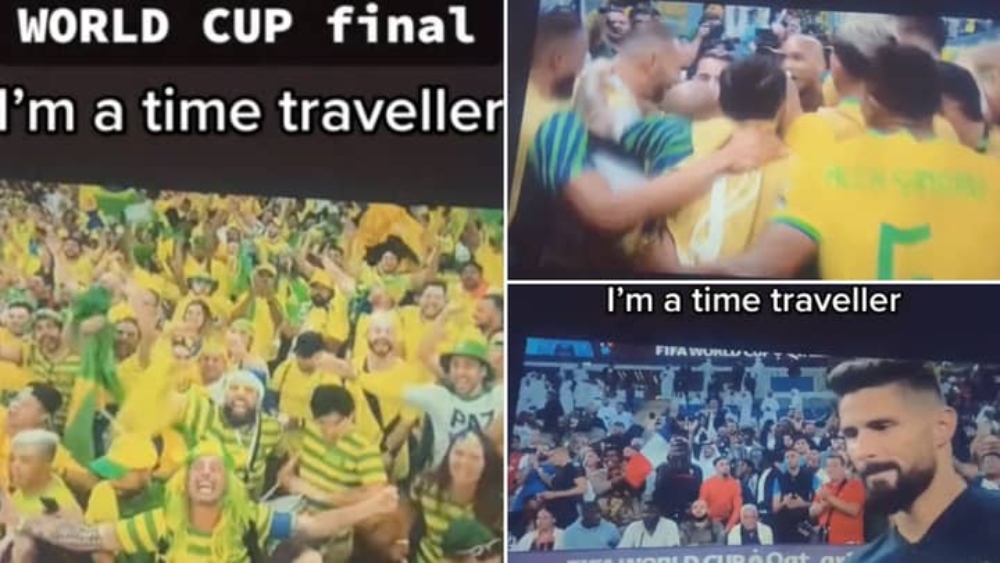 A self-described ‘time traveler’ shares footage showing who wins the FIFA world cup and claims that this footage is from three weeks in the future. He also reveals the World Cup winner in the footage.

Football fans around the world are tuning in to watch their nation compete in the 2022 World Cup and cheering it on. At this point, it's anyone's guess who will win the championship, with the exception of one TikTok user who believes they already know which team will win.

That Tiktoker ‘time traveler’ shares footage showing who wins the FIFA world cup of 2022. The appropriately named World Cup Time Traveller is one of the TikTokers who claims to be from the future and has the ability to travel across time.

But unlike the contemporaries, this one seems to have predicted a few things correctly, like Italy's final score in the postponed Euro final last year. Another video shows them correctly predicting England's 4-0 win against Ukraine in the same competition.

It's safe to assume that his ideas have been regarded with skepticism. Some have questioned whether they produce many videos with various ratings and keep them hidden until the final results are revealed.

But the TikToker made his World Cup prediction before the final, so if this is true, he can't take it back. The video, which shows football players and fans from South America celebrating a big win, makes it seem like Brazil will win the championship.

The caption on the video read, "Brazil just beat France in the 2022 World Cup final." "I'm a time traveller," they said, assuring their supporters that they are 'helping' them just like last year. It's still too early to tell if their prediction is right, but the TikTok community is once again split.

Some point out that the purported footage from the future appears to be from Richarlison's celebratory goal, which is why some people aren't convinced. Some quipped that The Simpsons is the only source they will ever believe.

However, some were quick to draw attention to the "time traveler's" accurate predictions. One person commented, "He got it right on Euro 2020 btw," while another wrote, "Imagine if he gets it right again." A third added: "If those two actually playing in finals... I'm putting my life savings on Brazil."

We still have a few weeks till the big show, so I guess all we can do is wait. Even though it could be tempting, it's generally not a good idea to wager your whole funds on Brazil winning until that time.

A TikTok user who claims to be a ‘time traveler’ shares footage showing who wins the FIFA world cup. The scene in the clip appears to be at full time, following Brazil's 2-1 victory over France to win the trophy.

The poster earlier published a clip in 2021 showing Italy defeating England 2-1 in the postponed Euro 2020 final. That is exactly what occurred a few weeks later when English hearts were crushed at Wembley.