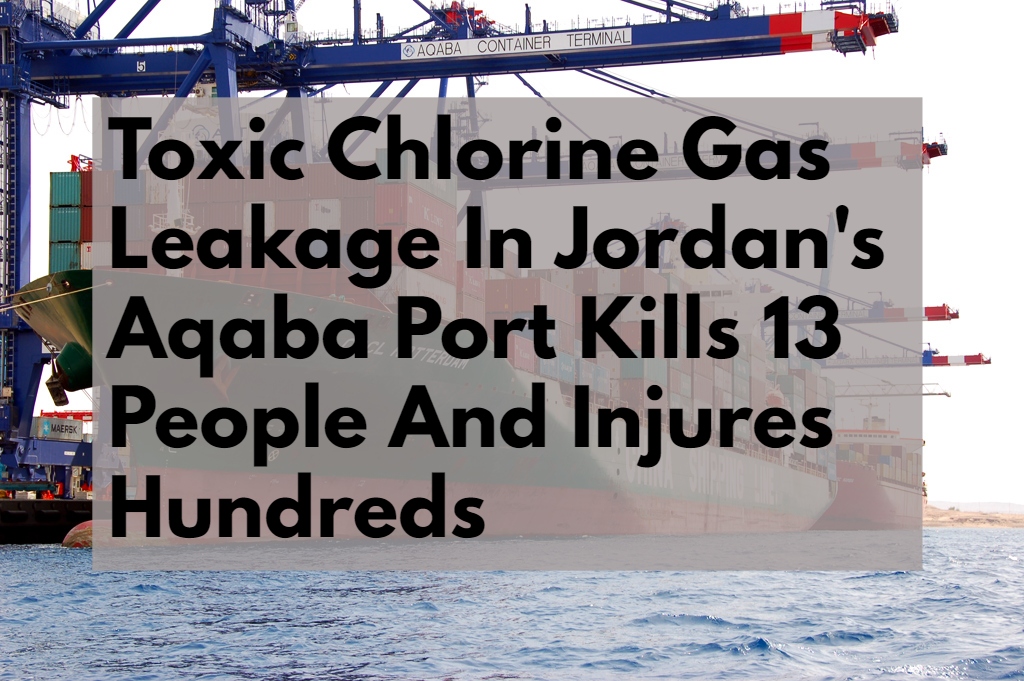 The 25 tonnes of Chlorine gas containers could be seen being raised into the air before suddenly falling into a ship and bursting in the footage captured by CCTV cameras.

A malfunction in the crane that was transporting the chemical storage container resulted in it falling to the ground, according to the authorities. 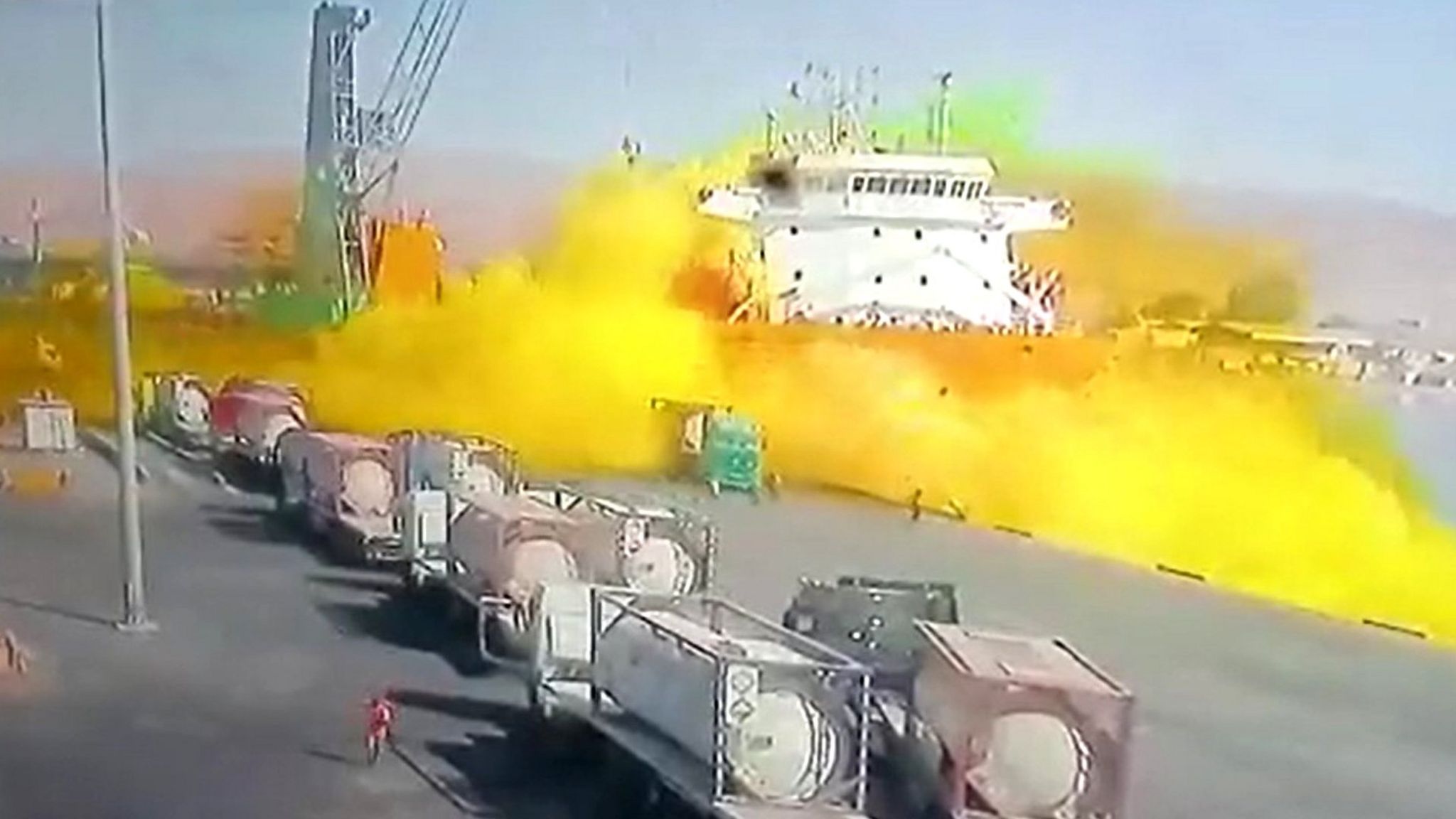 Dock employees were seen making their way out of the area on foot.

Moments before the explosion, a truck that was carrying a second gas tank had been slowly reversing its direction toward the ship.

The driver of the truck hastily changed course in order to avoid the yellow gas clouds after the accident.

The sight of a big cloud of bright yellow gas spreading across the ground causes people to flee in all directions in search of safety.

On Monday evening (June 27, 2022), state media reported that 123 of those affected were still being treated for chemical exposure at local hospitals.

According to the report, toxic chlorine gas leakage kills 13 people and injures hundreds in Jordan's Aqaba port. It was also reported that the condition of several people was really grave.

The station reported that Mohammed al-Mubaidin, a former head of the firm that operates the port, stated that a vessel had been waiting to load approximately 20 containers of liquified gas "carrying a very high amount of chlorine."

He stated that the gas was dense, and he explained that,

it is not easy for its gas clouds to move … as it concentrates in one area and is affected by wind movement.

The chemical known as chlorine can be found in a variety of commercial and residential cleaning products.

When at room temperature and pressure, the gas has a yellow-green hue; however, in order to store it and transport it, it is typically compressed and chilled.

Burning pain, difficulty breathing, and fluid accumulation in the lungs are all potential side effects of inhaling the gas or allowing it to come into contact with the skin or eyes.

According to the Centers for Disease Control and Prevention (CDC), chlorine was utilized as a chemical that caused choking during World War I.

Nidal Majali, the local commissioner for tourism and environment, told state media that the impacts of the gas leak were limited and that there was no concern for public health.

The only seaport in Jordan is located in Aqaba, at the head of the Gulf of Aqaba, which is off the coast of the Red Sea and close to the border with Israel.

The residential area that is the closest to the spill is approximately 25 kilometers away. 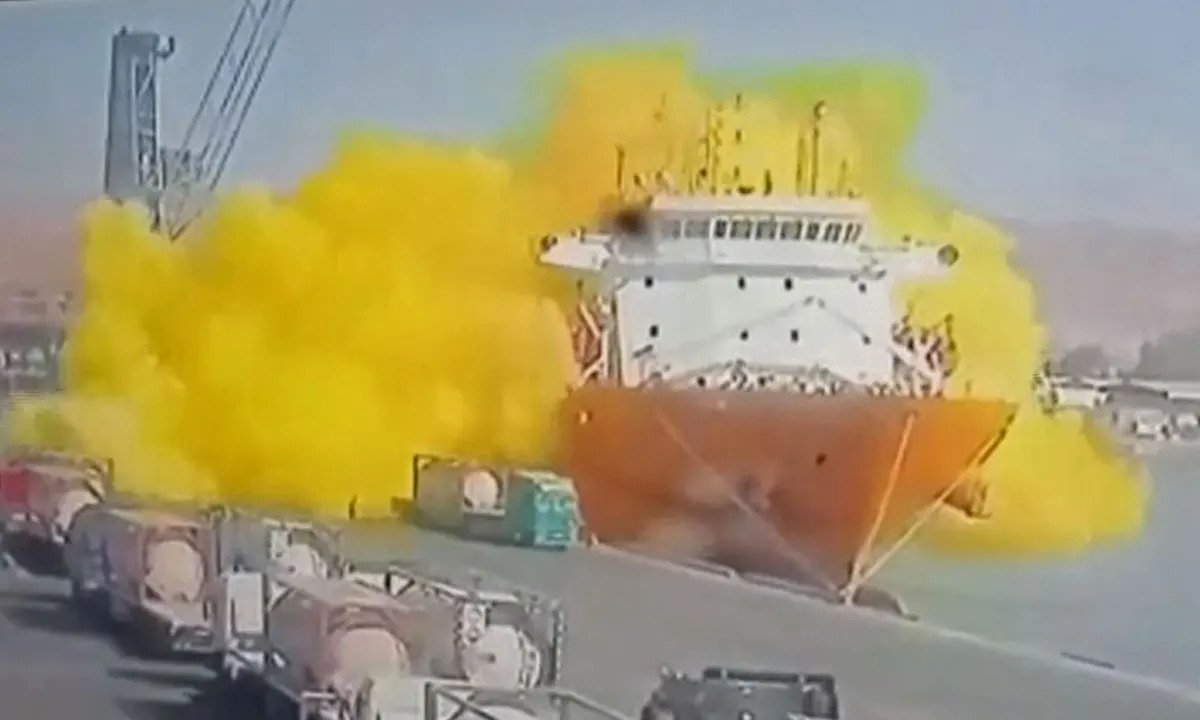 Yellow gas coming out of an orange and white ship

According to the reports on state TV, the city's health authorities encouraged citizens to stay inside their homes, with the windows closed, and to avoid going outside.

The local media displayed images of members of the civil defense troops and medical personnel running to the location of the leak while wearing masks.

According to state media, individuals reacting to the explosion were some of the people who ended up in the hospital with injuries.

Among those injured were members of the police force and other first responders.

There were approximately 200 persons taken to the hospital.

The wounded were taken to three different locations: a field hospital, two governmental hospitals, and one private facility.

Jamal Obeidat, the director of health services for the city of Aqaba, stated that all of the facilities were at capacity and that the injured were in "medium to serious condition."

Officials from the ministry of health stated that they anticipated only a small number of patients to be hospitalized on Tuesday.

As a result of the leak, which occurred around 15:15 local time (12:15 GMT) on Monday, residents of Aqaba city, which is located 16 kilometers (ten miles) to the north of the port, were instructed to remain inside and to close all windows and doors.

According to a report by the AFP news agency, the southern beach of Aqaba, which is located only 7 kilometers away and is a famous tourist destination, was also evacuated as a precaution. 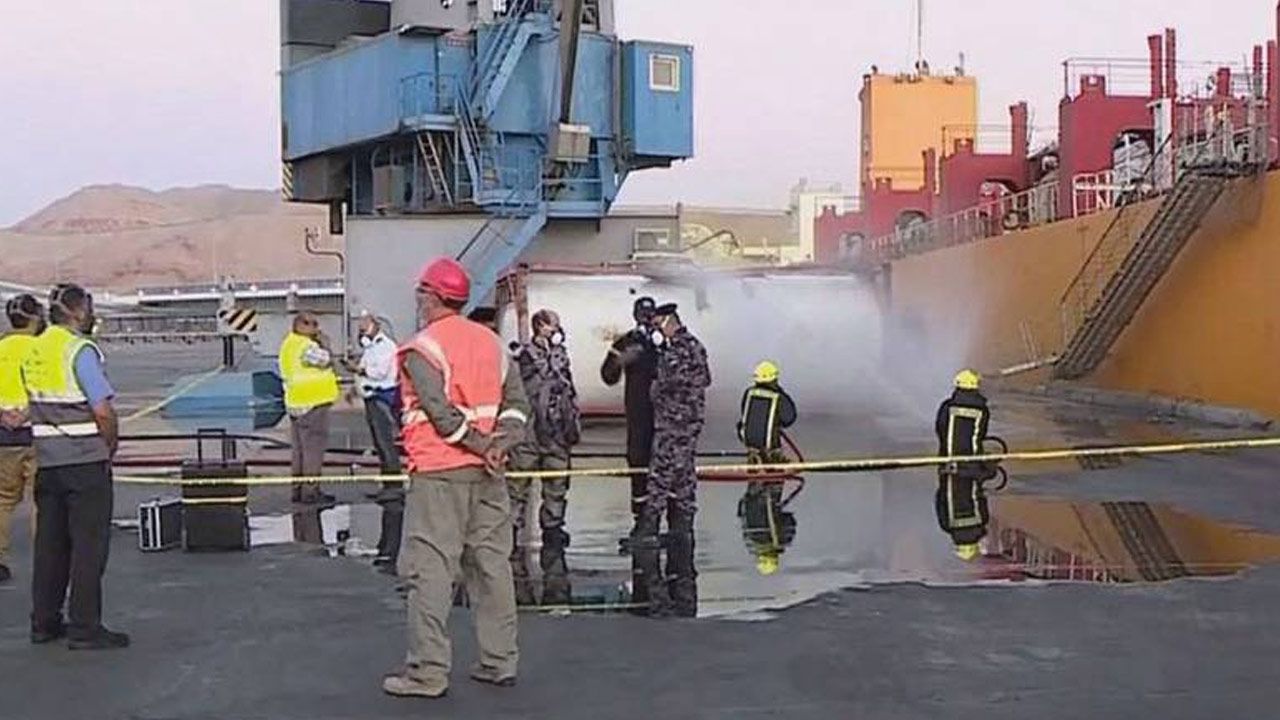 Government officials performing their duties at the Jordan's Aqaba port

After a period of time, the Minister of State for Media Affairs, Faisal Shboul, claimed that the city and the people living there were no longer in danger.

The Department of Civil Defense dispatched specialized teams to the port in order to address the leak and carry out the clean-up operation.

The Prime Minister, Bisher al-Khasawneh, boarded a plane to Aqaba and went to a hospital there, where some of the injured were being treated.

He issued an order to the Minister of the Interior, Mazen Faraya, instructing him to supervise a transparent investigation into the "regrettable" tragedy and to guarantee "all resources to ensure the total security of workers at the ports and all necessary precautions in relation to hazardous materials."

Moreover, he emphasized the importance of taking all necessary precautions in relation to hazardous materials.

An "iron rope" that was carrying the container "broke" while it was being loaded onto a vessel, according to the deputy director of the port of Aqaba, who was interviewed by AlMamlaka TV.

The chlorine that was being shipped to Djibouti was packed into the container at a rate of between 25 and 30 tonnes per cubic meter.

A Reddit user LordGarak defended the crane's driver, "It's not the crane operator's fault. He didn't hit anything and it looks like the crane didn't break. The rigger who connected the load maybe. The engineer who signed off on using that container for chlorine. The management for the poor rigger training and improper equipment maybe."

A Reddit user Stevedaken explained what is chlorine, "Chlorine is an asphyxiant - in really really basic terms, it replaces all of the oxygen in your lungs and you dry land drown. Bonus - as it mixes with water it forms a couple of different acids that burn your lungs."

Fernandrew said, "That orange color is the chlorine reacting with the moisture in the air creating an acid & chlorine cloud."

Toxic chlorine gas leakage kills 13 people and injures hundreds in Jordan's Aqaba port, but the situation is now under control.