Wadi-Us-Salam - The Biggest Cemetery In The World 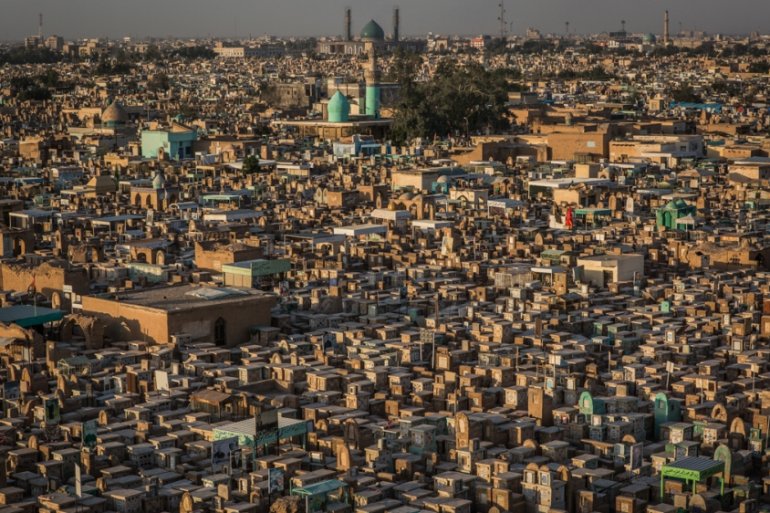 Wadi-us-Salam - Najaf's Wadi-us-Salam is an Islamic cemetery located in the Shia holy city of Najaf in Iraq's northern province of Nineveh. It is the largest cemetery in the world by land area. There are more than 8 million bodies in the cemetery, which spans 1,485.5 acres and contains more than 6 million people.

Burial at this sacred site has been a religious rite for well over a thousand years and continues to be so now. Millions of people have been laid to rest over a congested, yet spacious 1500-acre cemetery that takes up roughly a third of the city's land area.

Increased violence over a period of several decades has resulted in an alarming increase in the number of graves. Combatants have more recently used the twisted tangle of passageways connecting tombs to hide and ambush opposing forces, escalating the conflict to the Shi'a sacred ground. What is the significance of this burial cemetery, and how did it grow to be so large? 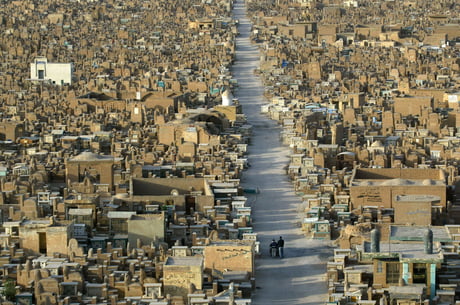 A drone shot of wadi-us-salam with straight road

Wadi-us-salam also draws a large number of pilgrims each year, numbering in the millions. In close proximity to the shrine of Ali ibn Abi Talib, the fourth Sunni Caliph, the cemetery serves as a resting place for many Muslim pilgrims. As a result, a large number of Shi'ites in Iraq have requested to be buried in this cemetery. Shi'ites from all over the world are being (or are attempting to be) interred in the cemetery, thanks to advancements in transportation technology.

Burial at the cemetery, on the other hand, means being interred in one of the cemetery's numerous catacombs. According to an undertaker at the cemetery, each crypt has the capacity to contain up to 50 people. Marja' has complete control over the burial grounds.

The Shia Customs And Traditions

Wadi-us-Maqam Salam's al-Mahdi (Maqam al-Mahdi in Arabic) Tradition has it that Abraham purchased land in Wadi-us-Salaam. In accordance with religious edicts, the Shia are urged to bury their dead in this spot, and the cemetery's expansion is considered a result of Shiism's "more lenient attitude than Sunnism" toward the commemoration of the deceased and the construction of mausoleums.

Some of the procedures performed before burial in the cemetery include:

It has been almost 1,400 years since daily burials have taken place at the site, and it is now on the Tentative List of UNESCO's World Heritage Sites. Burials in Najaf have been documented as far back as the Parthian and Sassanid eras, and ancient Mesopotamian cities were known to have cemeteries with an accumulation of graves, which were similar to Najaf. There were between 200 to 250 corpses buried there daily during the Iraq War, but by 2010, the number had dropped to less than 100, according to the most recent estimates.

Every year, around 50,000 fresh bodies are interred in the cemetery, with the majority of them coming from all over the world. This is an increase from the approximately 20,000 remains, largely from Iran, that were interred annually in the early twentieth century, according to the United Nations. The majority of Iraqi Shi'ites, as well as many Iranian Shi'ites, have a relative buried in the cemetery. Since 2014, when the battle against ISIL began, it has been claimed that burial grounds are becoming scarce, resulting in many being seized, illegally traded, or improvised.

The vast majority of burials are constructed of baked brick and plaster, with varying levels of elevation. The deterioration of older plots is more noticeable; beautiful metal crypts with tilted roofs suggest inhabitants of different social statuses. Crypts the size of rooms with huge domes may be found around the site. Ornate towers paid respect to the past while also announcing a more privileged lifestyle for their occupants.

As burials became more difficult to accommodate, the number of graves decreased. The subterranean vaults are normally accessible by means of a ladder, however, those buried underneath other vaults are not always marked with visible marks above ground. 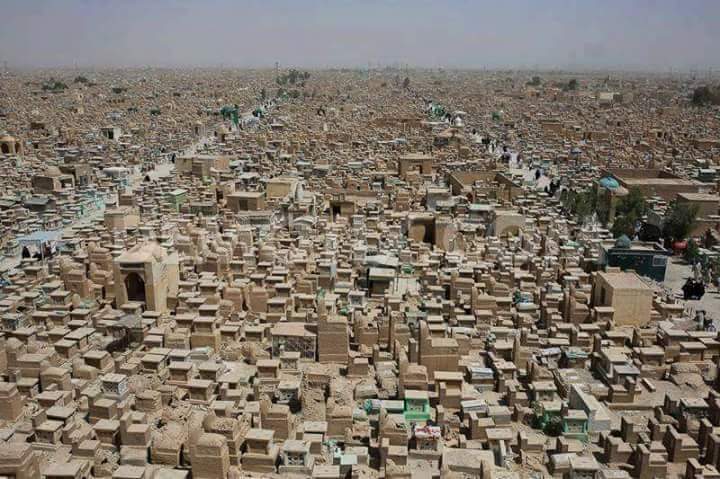 A drone shot of wadi us salam cemetery

Who Was Buried In Wadi Us Salam?

"You know how many people are dead in there?

I’ll see myself out."

"It’s in Iraq btw, for those who don’t want to click through."

Additionally, the kings of Al-Hira and its leaders from the Al-Sassani Era (637-226) were interred in the Wadi-us-Salam, as were associates, kings, Sultans, and princes of the states of Hamdania, Fatimia, Al-Buwayhyia, Saffawayia, Qajar, and Jalairiyah who were buried in the cemetery.