Now, I don’t know about you but I’d really like to know what oracle The Simpsons creators have had access to all these years, because they always seem to nail their predictions decades ahead of time.

I’s really starting to freak me out.

I mean, it was almost two decades ago that an episode of The Simpsons predicted that Donald Trump would one day become US president and who in their right mind would have ever foreseen that one coming?

Other than the man himself maybe.

Some fans claim they even predicted the 2014 Ebola outbreak a staggering 17 years before it happened.

In a scene from the episode ‘Lisa’s Sax’, Marge suggested that a sick Bart read a book titled ‘Curious George and the Ebola Virus’.

Although the virus was first discovered way back in 1976, the worst of the outbreak didn’t hit until 17 years later.

And now, fans are certain Tom Hanks cameo appearance in The Simpsons Movie in 2007 ‘predicted’ the Hollywood actor would end up self-isolating with coronavirus. 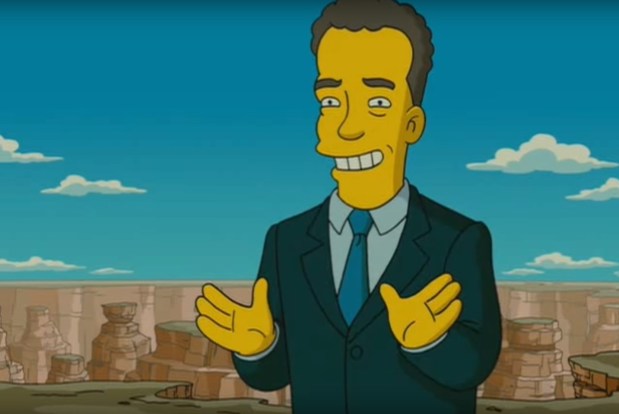 In the feature, Hanks was seen advertising a ‘new grand Canyon’ and claimed that the US government had lost its credibility.

Of course, Hanks could be warning people to stay away from him for a number of reasons and we take it with a pinch of salt but many fans find it eerily accurate in light of his current state of self-isolation.

Tom and his wife Rita Wilson were hospitalised with the virus in Australia after testing positive for it after feeling under the weather.

Hello folks. @ritawilson and I want to thank everyone here Down Under who are taking such good care of us. We have Covid-19 and are in isolation so we do not spread it to anyone else. There are those for whom it could lead to a very serious illness. We are taking it one-day-at-a-time. There are things we can all do to get through this by following the advice of experts and taking care of ourselves and each other, no? Remember, despite all the current events, there is no crying in baseball. Hanx

Hanks was in Australia working on an untitled Elvis Presley film at the time he was diagnosed with the virus and said: “We felt a bit tired, like we had colds, and some body aches”.

“Rita had some chills that came and went. Slight fevers too”, he added.

Hello, folks. @ritawilson and I are down here in Australia. We felt a bit tired, like we had colds, and some body aches. Rita had some chills that came and went. Slight fevers too. To play things right, as is needed in the world right now, we were tested for the Coronavirus, and were found to be positive. Well, now. What to do next? The Medical Officials have protocols that must be followed. We Hanks’ will be tested, observed, and isolated for as long as public health and safety requires. Not much more to it than a one-day-at-a-time approach, no? We’ll keep the world posted and updated. Take care of yourselves! Hanx!

One social media user said: “The Simpsons also nailed the prediction of Tom Hanks being quarantined”.

With another adding: “Tom Hanks has coronavirus who’s gonna dig up the Simpsons episode that predicted this”. 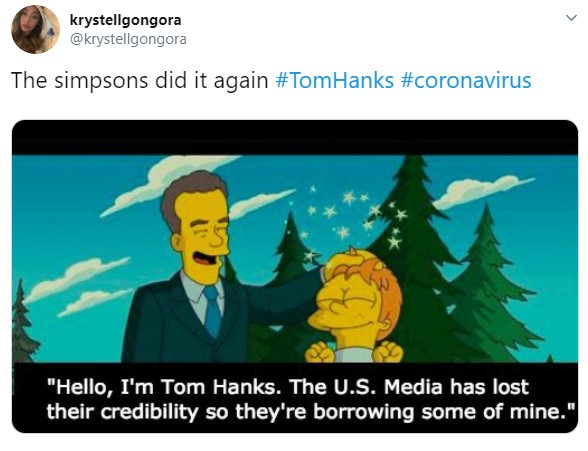 Fans have even asked whether The Simpsons “can predict the solution to the virus”.

Another added: “I need to watch The Simpsons to see if Tom Hanks will survive the coronavirus”.

Perhaps, medical experts and scientists across the globe should be keeping a close eye on The Simpsons state of play over the coming weeks (just in case).