Hummingbirds Can Fly Backward For Any Length Of Time 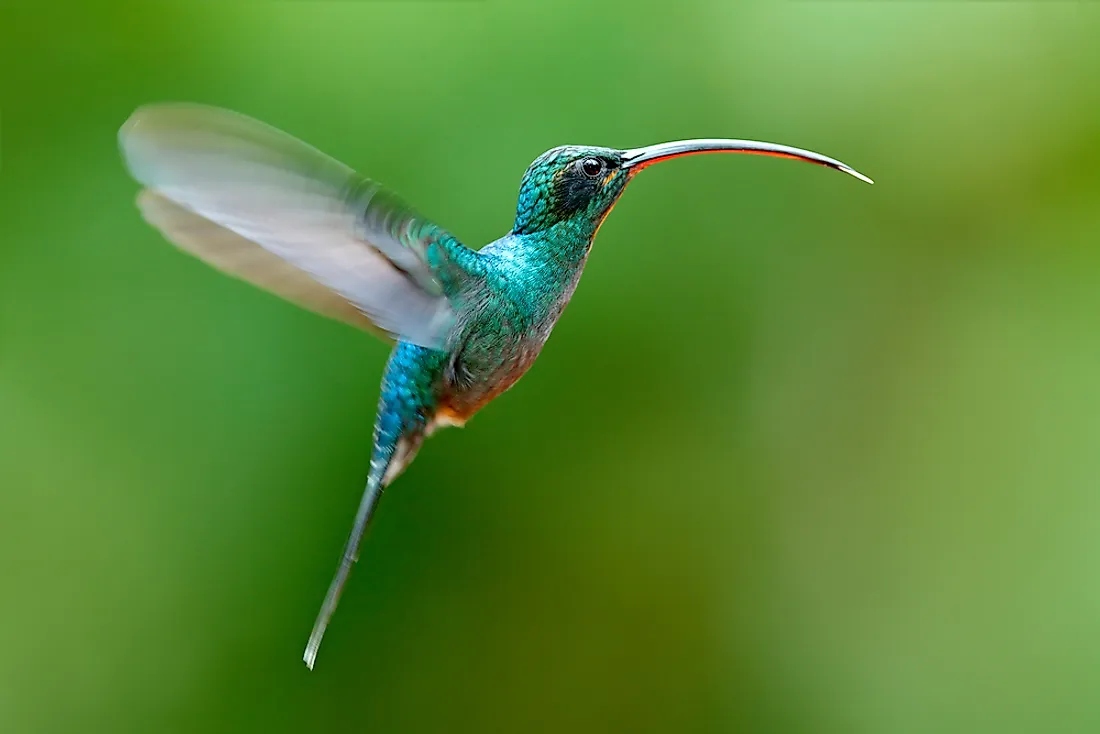 Hummingbirds can fly backward, and they are the only birds that can do so for any length of time.

People often ask Google, "Can hummingbirds fly backward" when it comes to these small birds.

You have never really thought about the fact that birds can fly in different directions. But yes is the answer.

Flycatchers, warblers, and herons can all move backward, but they only do so when they need to protect themselves.

Except for a few birds that live on the ground, almost all birds can fly. Birds are well-adapted for flying thanks to their strong wing muscles, feathers, and bones. 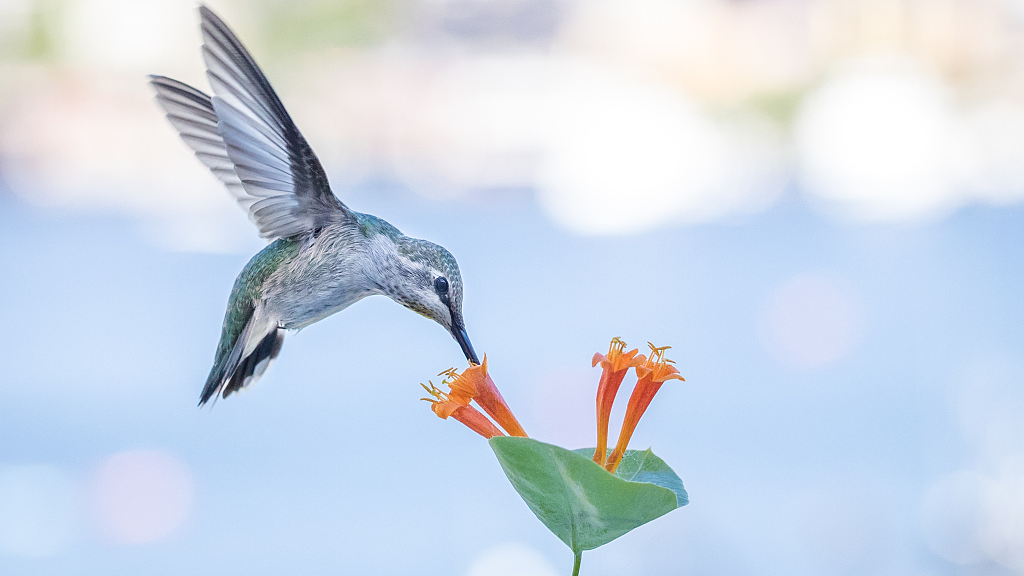 A hummingbird consuming nectar from a flower

Birds generate the force necessary to take off and move forward by beating their wings. They can move through the air in dazzling patterns by gliding, hovering, diving, and swooping because of their aerodynamic construction.

Some birds can fly for long periods of time or at very high speeds because their wing muscles are so strong.

Some birds, such as flycatchers, herons, and warblers, can fly backward, but only briefly.

However, one bird sticks out and sets itself apart since it is the only one that can fly backward. The hummingbird is a bird with the ability to fly backward.

In this article, have a look at the taxonomy, distribution, physical traits, flight ability, and some other important aspects of hummingbirds.

The hummingbird is a beautiful and interesting bird. They are the smallest birds that migrate, with an average length of 7.5–13 centimeters.

Hummingbirds can fly backward and they are the only birds to do that. The hummingbird flaps its wings in a figure-eight pattern. This makes it easy for the bird to fly backwards.

Because their wings beat so fast, they make a humming sound. This is how the bird got its name.

Because their metabolism is so fast, hummingbirds live for a long time.

It is known that a female broad-tailed hummingbird can live up to 12 years. Most species in North America live for between three and five years. 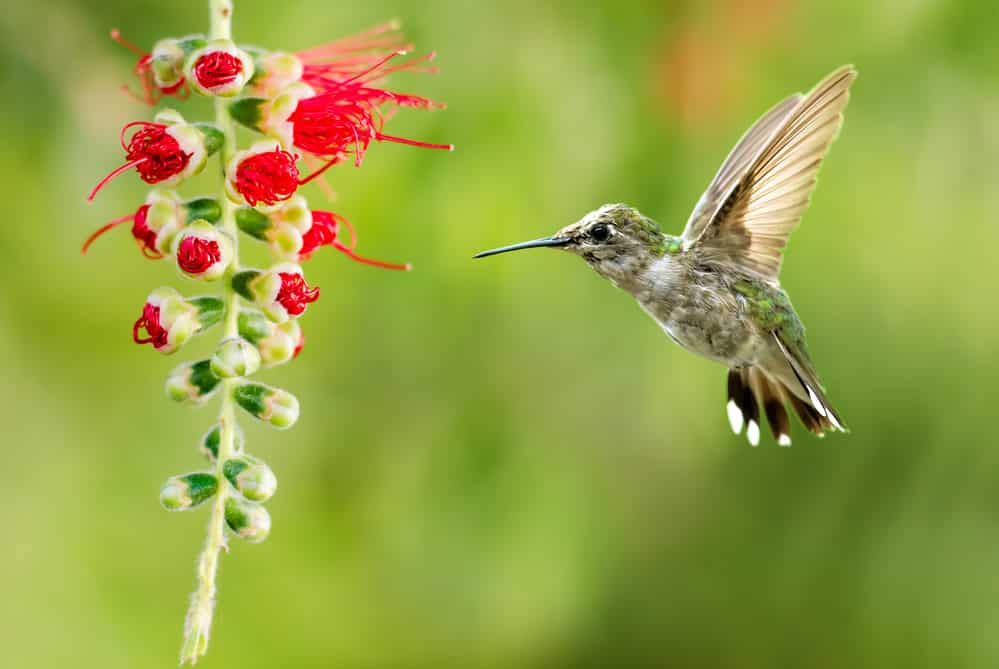 Hummingbird flying towards a flower on a green background

Hummingbirds first appeared between 30 and 40 million years ago.

Today, all hummingbirds are members of the Trochilidae family. They make up the order Apodiformes along with its nearest cousins, the swifts and tree swifts.

There are more than 360 different species of hummingbird in all. Given this variety, only the tyrant flycatchers and tanagers may claim more distinct species within their families.

Based on comparable ancestry and traits, researchers grouped these hummingbirds into 9 separate clades, or groups.

Each of these hummingbirds has developed special physiological traits that enable them to consume nectar from various blooms.

Because of this, hummingbirds got more unique features where there were more kinds of flowers.

In other words, the variety of distinctions between hummingbird species increases with the number of flowers in an area.

All hummingbirds have long, curved beaks that were made to help them feed on nectar from flowers.

However, depending on the surrounding flora, their bills' size and curvature can vary dramatically.

There are also a lot of different colors of hummingbirds, with the males often having brighter colors.

Depending on the lighting, their feathers can appear in a variety of hues, ranging from green to blue to purple to red.

Males usually ruffle their feathers to attract females and have bright plumage as a result of courtship activities. 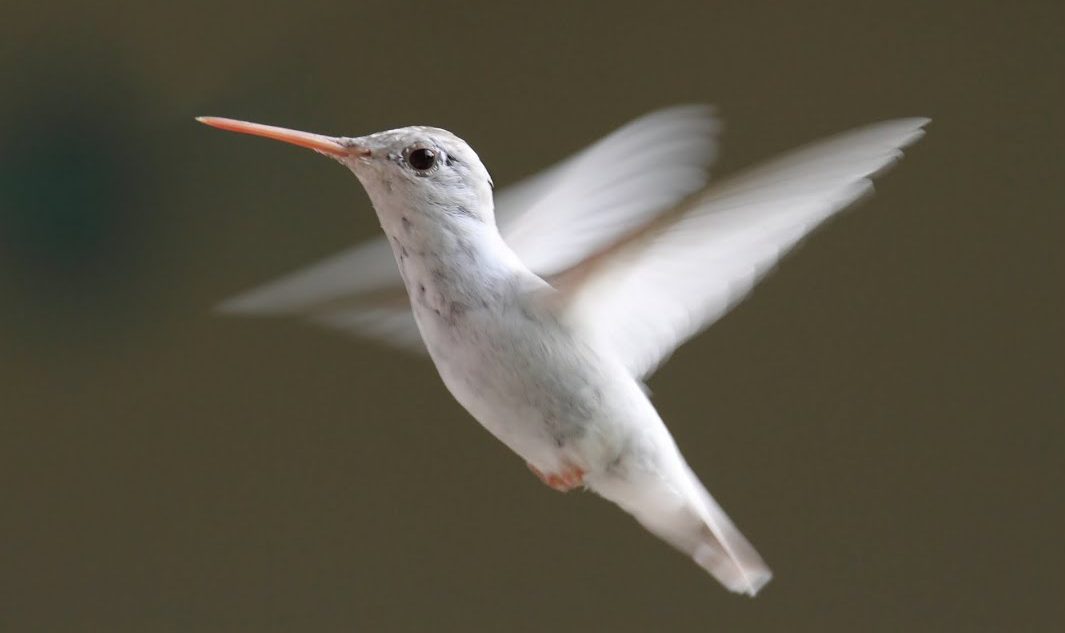 An albino hummingbird on a brown background

According to the Audobon Society,

The hummingbird is the only bird that can truly hover. It manages this by flapping its wings 20 to 80 times a second. It can fly straight up and down. Backwards and forwards. Or upside down. And up to 75 miles an hour. But don’t worry, it won’t run into you. This bird can slow down from 25 miles an hour to a dead stop in a space no longer than your index finger.

Only hummingbirds have the ability to fly backwards for any period of time. The wings of the vast majority of birds prevent them from flying backwards.

As a result, the air surrounding the wing is shoved backward, propelling the bird forward.

They have powerful muscles to pull the wing down, but much weaker muscles to lift the wing back up.

Some birds, like cuckoos when flying against a strong wind, appear to be flying backwards but are actually moving forward relative to the air, and some birds, like herons, egrets, flycatchers, and warblers, can flutter backwards for a brief distance as a defensive strategy.

The muscles in a hummingbird's wings allow it to rotate its wings in a figure-eight pattern as well as move them up, down, backwards, and forward.

This enables them to perform some amazing airborne maneuvers, like flying backward.

A hummingbird can fly in a figure-eight formation as well as forward, backward, up, and down.

They have wings that can beat up to 80 times per second, and their upstroke is much more powerful than other birds'.

Instead of the "hovering" technique used by other birds, this enables them to hover in place like some insect species do.

Their fluttering wings produce a distinct humming sound due to how quickly they move. The hummingbird gets its name from this sound.

Hummingbirds perform numerous significant ecological tasks. They can visit hundreds of flowers in a single day because of their feeding needs.

Hummingbirds are among nature's most active pollinators because of their nectar needs.

In addition to flowers, they pollinate trees and other flowering plants in their surroundings.

They also serve a significant cultural purpose, both historically and currently. The Aztecs were very fond of hummingbirds, and Huitzilopochtli, their god of war, was often shown as one.

Other indigenous groups also told stories and created myths about the hummingbird. The doctor bird, sometimes known as the Jamaica bird, is now the national bird of Jamaica.

Why Hummingbird Can Fly Backward?

The hummingbird is the only bird that can fly backward for any significant distance. The ability to spin its wings and fly in figure eight is the key to its peculiar flight pattern. Because of this one-of-a-kind quality, hummingbirds are capable of amazing aerial acrobatics.

What Is The Only Bird That Can Fly Backwards?

The hummingbird is unique among birds in that it can fly in any direction. Because of the ingenious design of its wings, it can go in any direction, including forward, backward, up, down, or even horizontally.

Are Hummingbirds The Only Birds That Can Fly Upside Down?

Hummingbirds defy every norm. It's just these birds that can actually fly backward and upside down.

Are crocodiles really biologically immortal or not? This is an interesting fact and you should definitely learn about it.