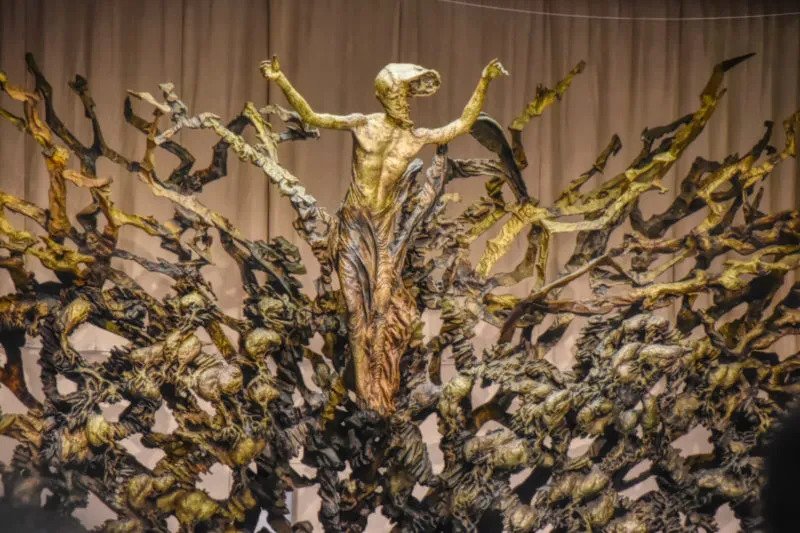 The Paul VI Audience Halls are the subject of many conspiracy theories, not only because of the sculpture, which many believe is a demonic portrayal and a serpent idol but also because of the architecture. 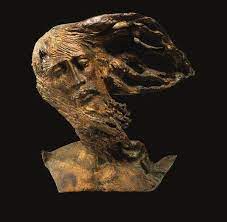 Closed view of the face of Creepy Giant Sculpture The Resurrection

What Is The Resurrection Statue?

The Resurrection (La Resurrezione) is an 800-quintal (80-metric-ton) bronze/copper-alloy sculpture by Pericle Fazzini in the Paul VI Audience Hall in Rome.

Intended to capture the anguish of 20th-century mankind living under the threat of nuclear war, La Resurrezione depicts Jesus rising from a nuclear crater in the Garden of Gethsemane.

The original work was done in polystyrene and the fumes of the burning plastic gave Fazzini a blood clot during its production. Creepy Giant Sculpture The Resurrection was restored over three months in 2011.

The fact that it is located in such a prominent location in the Paul VI Audience Hall serves to remind the audience that they should not be afraid of the second coming of Jesus Christ as Christians. Instead, people should be conscious of the fact that their trip and faith in this world is a never-ending Advent season. It raises people up to the point of encountering Jesus Christ for the first and final time.

Indeed, the Resurrection reflects the fatalistic atmosphere that surrounds every contemplation of Jesus Christ's second appearance on the scene. When Christians ponder about the Second Coming of Christ, they are filled with awe as they contemplate this momentous day.

A Reddit user taking this art piece as a movie scene and sharing his view:

"I thought this was a scene from that, or a similarly surreal and creepy movie until I read the title. WTF!"—_hitmon(Reddit) 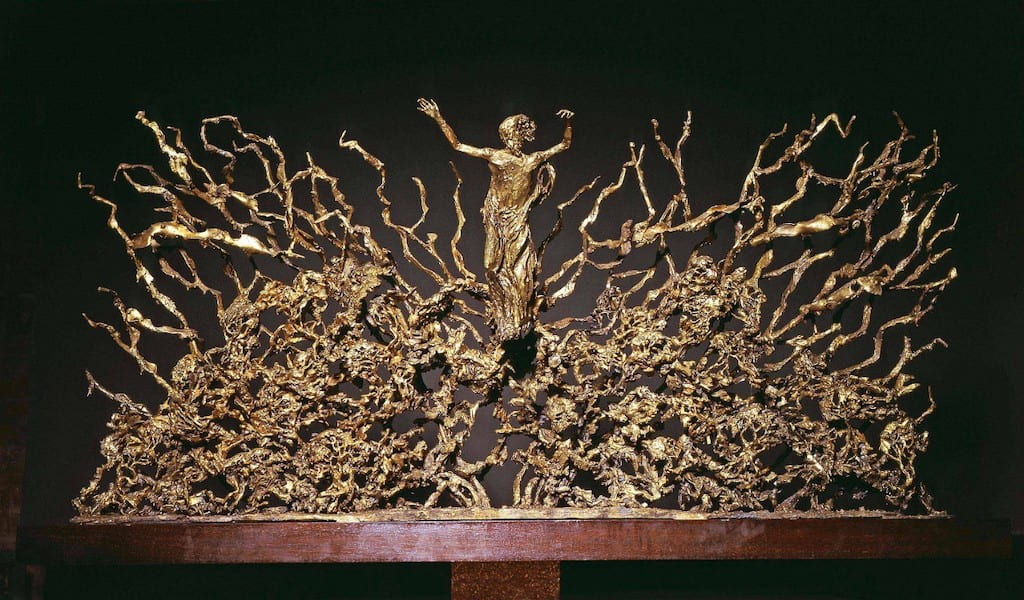 What 'The Resurrection' Demonstrates

The rising Christ, gloriously flying amidst the turmoil that narrates the story of death, takes up the full central piece of the wall behind the stage and is at the core of the installation.

He has long hair and a beard that both appear to be being blown about by the wind, and his face gives the appearance of someone who is suffering from an inner conflict.

The chaos is represented by a group of natural components that have been fused together and are not clearly defined as such. These are representations of rocks, roots, and twigs.

The awkwardly deformed forms of the sculpture, which symbolize the turmoil from which a risen Christ emerges, are appropriate for the tremendous event that the sculpture is attempting to express.

After all, emerging from the ashes of a nuclear bomb crater can hardly be described as a quiet and passive undertaking in the traditional sense.

The second coming of Christ, on the other hand, provides a reason for optimism.

It is evident in the way he has raised and outstretched his arms in what appears to be a welcome to the throngs of people in the hall.

His long hair and beard, which are blown by the wind, lighten his overall appearance, even as he depicts this bleak setting.

The following is how Fazzini characterized the situation:

"An explosion from the earth, with olive trees in the air, stones, clouds, lightning bolts … like an enormous storm in the form of the world and Christ who rises serenely from all of this."

According to Fazzini, the inspiration for this piece came from the thought of Christ teaching peace for two millennia in the olive grove of Gethsemane, the location where he was last seen playing - the Garden of Gethsemane. In the New York Times, he describes the Resurrection as an eruption from the soil that destroys the garden and he elaborates on this concept:

"I had the idea of depicting Christ as if He were rising again from the explosion of this large olive grove, peaceful site of His last prayers. Christ rises from this crater torn open by a nuclear bomb; an atrocious explosion, a vortex of violence and energy."

Initially, Fazzini displayed a full-scale prototype of the complete artwork in order to illustrate his concept. He created it with polystyrene and electrical hotkeys, which allowed him to create a complicated and compositional structure out of the material. Unfortunately, the gases from the burning polystyrene sculpture caused Fazzini to develop a blood clot during the process of creating the artwork.

A Reddit user Limp_Distribution is appreciating the Vatican art:

"The Vatican has an incredible art collection and it’s museum is a wonder to walk through. So many just hit the highlights and never plunge into the depths of their collection."

The Meaning Of "The Resurrection"

A secondary purpose of the 8-metric-ton sculpture was to convey the agony caused by the status of the globe at that time. During the 1960s and 1970s, mankind was living under the fear of nuclear war and under a shaky peace that was characterized by tensions, particularly among Western countries, at the time.

Because of the imminent prospect of a nuclear war of catastrophic proportions, it is not surprising that this was represented in a variety of artworks created during this time period. In this way, La Resurrezione is a fitting representation of the second coming of Jesus, as it depicts him emerging from a nuclear explosion crater. At the time, it seemed very plausible to believe that atomic forces would be responsible for the extinction of the human race.

As a result, it is far from being beautiful and peaceful, but rather menacing, as it attempts to portray the tension and expectation of devastation that typified the period. Christ rises from an endless state of chaos, which is supposed to depict the death and destruction caused by atomic powers, in order to save the world.

As a matter of fact, many artworks created prior to the Renaissance period were depicted in spiritual form rather than showing scenes from everyday life. Later on, however, painters began to use imagery that was more representative of real-life and the eras in which they were living.

Understanding The Concept Behind 'The Resurrection'

It makes it reasonable that religious artworks would include themes related to mankind's plight. For this reason, artists often immerse themselves in the presence of anguish, desiring to know or offer solutions to existential questions.

Fazzini exploited the Cold War era's nuclear tension-filled backdrop to lend significance to the obscure event of Christ's resurrection. The consequence is alarming and troubling.

The sculpture depicts a secularised and terrifying society where growing superpowers threaten a nuclear war of epic catastrophic proportions. This sculpture may bring visitors distress even if the fatalistic subject is too close to reality.

While the rising Christ is designed to comfort Christians in the midst of chaos, it must have also caused terror at the time, since the possibility of the world's end was quite serious. Therefore, it took on the alarming similarity to the book of Revelations and the current situation in actual life.

Even though the Cold War is over, people still face many more dismal and apparently devastating catastrophes and calamities.

Statue of "The Resurrection" in Vatican receives restoration

Conspiracy Theories Related To 'The Resurrection'

Conspiracy theories have arisen as a result of the sculpture's bizarre look, which measures 66 feet by 23 feet and weighs 6,000 pounds. It is claimed by conspiracy theorists that the monument symbolises the goddess Baphomet, a deity who was purportedly worshipped by the Knights Templar and who has since become the most important symbol and idol in the occult, pop-star art, and Illuminati iconography.

It is claimed that if you look at the Resurrection statue on its right-hand side as if it were a mirror, you would be able to clearly see Baphomet's head, which is in the shape of a goat, peering back in your direction. There are several conspiracy theories surrounding the artwork, and this is only one of them.

The Vatican's Resurrection sculpture is worth viewing if only to dispel the notion of Serpent imagery. Creepy Giant Sculpture The Resurrection's perfect blend of classical beauty characterized by Renaissance ideals and realism attracts art enthusiasts.

Many people daydream about Jesus' second coming as a source of consolation and hope. This has a fatalistic or melancholy vibe since the world may be ending. So The Resurrection is founded on these ideas of Jesus' second arrival.