The Boneyard - The Graveyard To More Than 4K Aircrafts 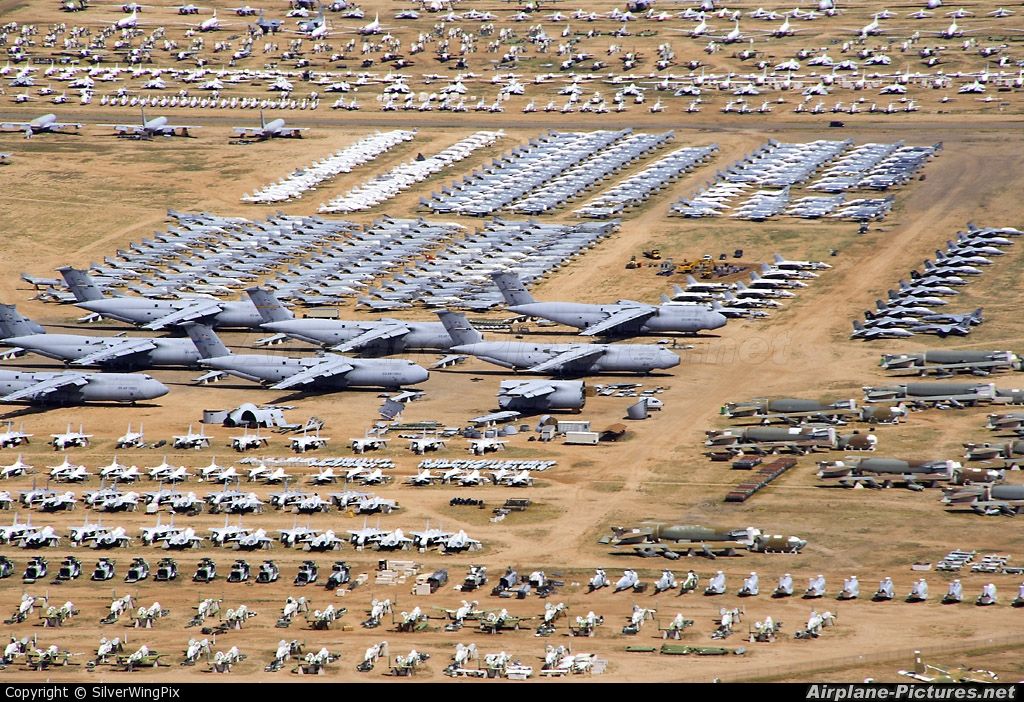 No doubt, you've heard of old elephants that stray off to die in a particular public location, sort of an elephant cemetery. Similar ideas apply in South Central Tucson, the boneyard, the center of the Sonoran Desert, where obsolete planes repose in place of old pachyderms.

Almost everyone in the aviation community is aware of the Air Force's "Boneyard," a 2,600-acre desert area in Arizona where thousands of retired military aircraft wait out their final days in silence. People often think of the site, which is at Davis-Monthan Air Force Base in Tucson, as an airplane cemetery, where the inhabitants are destined to be scrapped for their precious metals. But that just tells part of the story.

The Tucson region makes a good location for an airplane cemetery. Its climate, which is dry, clear, and essentially smog-free, lessens corrosion. Its alkaline soil is so solid that it may be used to pull and park airplanes without them sinking.

These military workhorses have been formally retired and put on hold. To shield them from the sand and grime of the desert, their windows and engines have been taped. A properly sealed plane can be kept in the desert for years because of the mild winters and minimal humidity.

A fence enclosing piles of scrap metal and airplane carcasses is not an airplane graveyard. Instead, millions of dollars worth of surplus parts are recovered to keep operational aircraft, even American aircraft that have been sold to foreign countries, in the air.

Location Of The Arizona Boneyard

At Davis-Monthan Air Force Base, which serves as a graveyard for about 4000 aircraft, AMARG is located not far from Tucson's downtown. Since it housed B-29s and C-47s from World War II, AMARC/AMARG performed its odd role under numerous titles.

These older aircraft have been scrapped or sold as surplus. Today, you have to go to several military stations spread out around the nation if you want to see historic, commemorative aircraft.

A storage facility on the Davis-Monthan Air Force Base, visible from Interstate 10, is referred to by many locals as the "boneyard." The facility serves as a holding area for storing aircraft until their ultimate fate is decided.

The 309th AMARG is the official name of the Boneyard (Aerospace Maintenance And Regeneration Group). All surplus military and governmental aircraft are stored at an AMARG. The Air Force, Navy, Marine Corps, Coast Guard, and NASA all process planes, jets, helicopters, and space shuttles here.

AMARG also transforms combat jets into aerial target drones. Tucson, Arizona's Davis-Monthan Air Force Base is home to the 309th AMARG. After World War II, this collection gained popularity. In order to maintain the 4,400+ aircraft that have made this airfield their permanent home, more than 500 workers are currently employed. The receiving branch welcomes the aircraft when they first touch down at the 309th AMARG.

The duties of this group include reviewing the carrier's paperwork, which includes the full history of documentation and any maintenance that has been noticed over time. Then, all weapons, ejection seat charges, clocks, and sensitive gear are removed from the airplane. 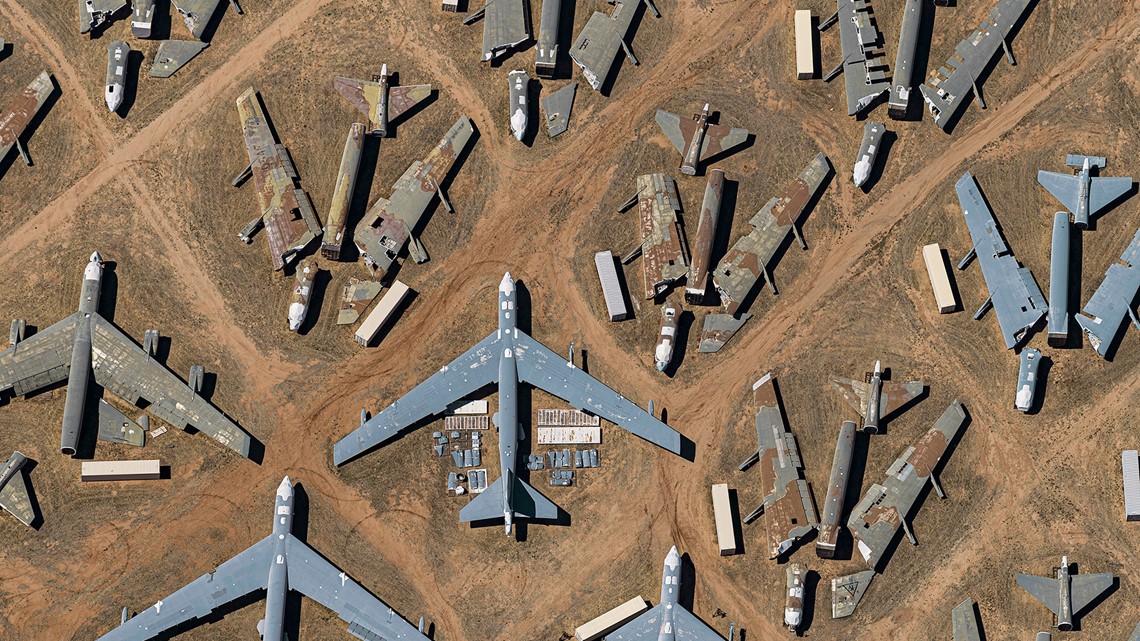 A relaxing bath is taken after the cavity cleaning. For automobiles that have been used in saline environments, this wash is very crucial. The salt must be completely removed in order to prevent exterior corrosion while being stored.

The gasoline system is sequentially drained, loaded with lightweight oil, and then drained once again. This applies a shielding oil film to the system. Finally, the aircraft is protected from sunshine, heat, and dust.

Several methods are employed, including spraylat (a high-tech, opaque, white vinyl plastic compound spray) and trash bags. The spraylat keeps the cabin usually within 15 degrees of the ambient temperature.

The AMARG employees refer to themselves as the "boneyard wranglers." Barnard is in charge of overseeing the entire project, which entails demilitarizing and recycling as well as restoring the fighter jets, planes, and helicopters.

There are just under 700 of them on site. There is so much wonderful use, according to Barnard.

People believe there to be a tremendous deal of mystery about what happens here because we're behind a fence and we're an active military facility.

As the commander of this facility, I can now see that a lot of incredible things take on here. Nothing is wasted since we can reuse as many resources as we can while we're here.

For some older aircraft types, the boneyard is frequently the last place to find the parts needed. Simple, urgent requests can be fulfilled the same day, according to Barnard, but harvesting and delivering larger, challenging-to-reach pieces can take weeks or months.

We've done specific cuts on airplanes, where we'll take a piece of an airplane and deliver it to someone who needs it. One of the C-130s that provides maintenance for the Antarctic science stations is equipped with a tail part that was formerly exposed to Tucson's heat.

We are sometimes referred to as an air power reserve, according to Barnard. Our crew members take great delight in maintaining and caring for vintage airplanes. They are aware that they might be required once more, whether it is for an entire plane or simply its pieces.

Nearly 95% of the aircraft land at the boneyard on their own. They taxi through a gate at the southern end of the runway after landing at Davis-Monthan Air Force Base to get ready for bed.

The "flush farm" is their first stop; depending on the type of aircraft, defueling supervisor Dale Pace and his staff can service up to six of them daily. According to Pace, the task requires more time for huge aircraft with numerous engines, such as the enormous C-5 Galaxy transport.

The former Air Force mechanic claims that it "takes us forever and a day" to defuel. It functions somewhat similar to a blood transfusion. All of the aviation gasoline is pumped out and replaced with a specialized oil that coats the tanks and fuel systems to prevent corrosion.

This oil is similar to that used in sewing machines. The only way to accomplish it is to start the engines. The Navy P-3, which landed at AMARG the previous week and was hauled to the flush farm earlier in the day, is being worked on by the crew on a particular day.

As the rest of the jet fuel is burned off and the oil is drawn into all the areas that require protection, two members of Pace's team climb behind the controls of the retro-looking aircraft.

Pace waits outside the plane, keeping an eye on the engines for the telltale sign that the trade is finished. He signals to the men in the cockpit to turn off the power as soon as he notices puffs of white smoke resembling those at the Vatican.

The F-15 and F-18 fighter jets must be lashed to the ground and run with their afterburners engaged, producing a rumbling sound that reverberates throughout Tucson. Storage induction Manager Herman Castillo adds, "And if you do it in the winter, you get a wonderful lengthy flame" from the exhaust ports.

Every four years, any planes that are anticipated to fly again must be refueled and fired up to ensure that all of their systems, including the engines, are still in good operating order. Then, according to Castillo, they are flushed once more, sealed up, and brought back to the boneyard. 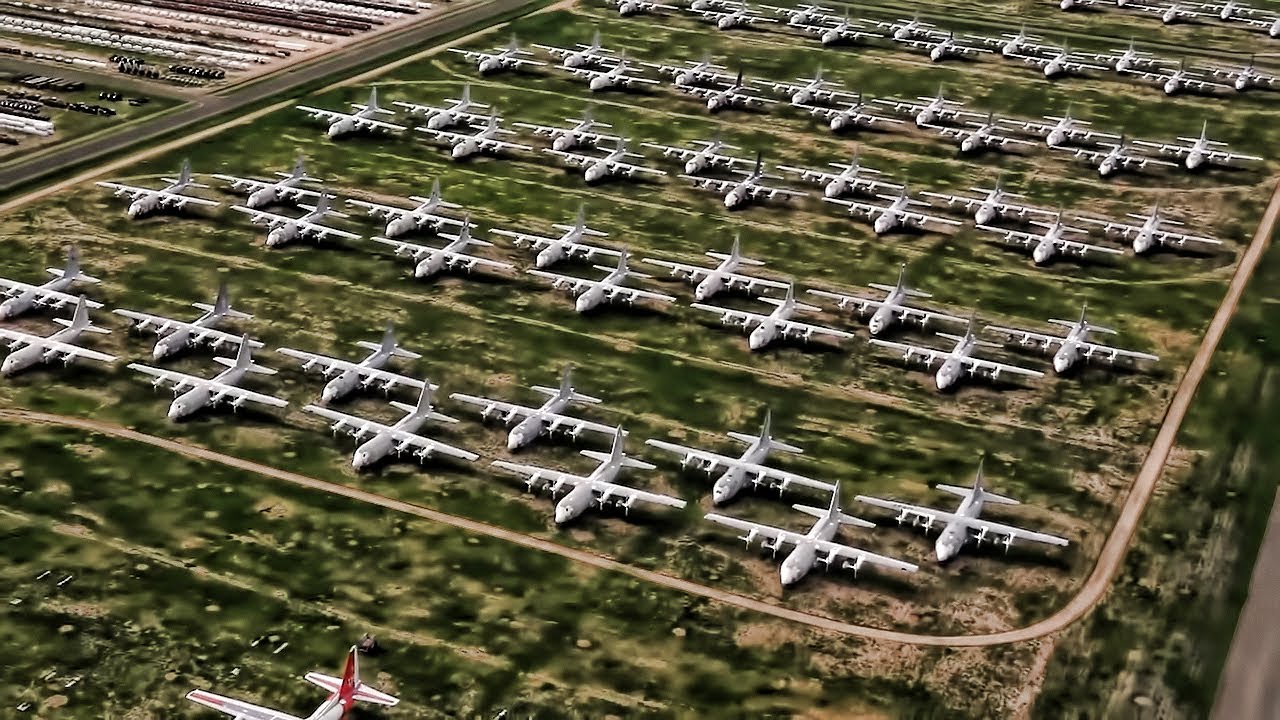 Planes are precisely placed after one another in a green area

Can You Visit Airplane Graveyard Tuscon?

Despite their placement on an active military base, tours are offered of the Boneyard. Visitors board air-conditioned buses at the adjacent Pima Air & Space Museum for a tour through the Boneyard of stored aircraft inside Davis-Monthan Air Force Base to see the world’s largest collection of military aircraft.

The amount of hardware on display is striking. Some of the planes look ready to take off while others are partially salvaged, as if the turkey vultures soaring overhead have been picking them clean.

Upon approach the rows of angular F-14 fighter planes emerge like giant metal scorpions lying in wait on the desert floor. Security around them is strict since this particular model is still flown by the Iranian Air Force, which is desperate for spare parts to maintain their fleet.

How Many Planes Are In Boneyard Tucson?

AMARG's typical inventory comprises more than 4,400 aircraft, which makes it the largest aircraft storage and preservation facility in the world.

Where Is The Largest Aircraft Boneyard?

Housing the largest aircraft and missile facility around the globe, the Davis-Monthan Air Force Base in Tucson is a trove of aviation history. The Arizona boneyard is responsible for nearly 4,000 vehicles that are maintained, recycled for parts, and stored across miles of the dry, desert landscape.

Where Do Retired Planes Go?

When a jet is retired indefinitely, it is usually sent to an aircraft boneyard (or graveyard). Boneyards are often located in deserts as dry weather conditions help to limit corrosion. In these facilities, the valuable parts of an aircraft are removed for reuse or resale before the rest of it is scrapped

The official name of "The Boneyard" is the 309th AMARG Aerospace Maintenance and Regeneration Group (military-speak for a really cool aviation junkyard). On the southern outskirts of Tucson, at Davis-Monthan Air Force Base, is where it is situated.

With the exception of howling dogs, AMARG is the biggest salvage yard in the world. In stark contrast to their former responsibilities, the aircraft are arranged in rows with military-grade precision, packed so closely together that from above, their wings appear to be holding hands.

The background is stunningly gorgeous as the silver fuselages reflect the Rincon Mountains' varying colors to the east throughout the day.